HMOs and the infant microbiota

HMOs and the infant microbiota

On 20 March 2019, a CPD meeting for midwives and health visitors was held at the Royal College of Obstetricians and Gynaecologists in London. John Bonner reports on the proceedings

It has been known since the 19th century that there is a direct relationship between early diet and health. Breastfed infants had been shown to have lower incidence of infectious diseases and a higher survival rate than those fed formula. In the guts of healthy breastfed babies, the microbiota is dominated by Bifidobacteria (beneficial bacteria). Professor Sharon Donovan, Professor of Nutrition at the University of Illinois, presented the evidence for the unique relationship that has evolved between these bacteria and the human species.

Bifidobacteria use human milk oligosaccharides (HMOs) as their preferred source of food to grow. HMOs are a diverse group of complex carbohydrates that have a prebiotic effect. HMOs cannot be broken down by human digestive enzymes and instead pass into the colon. While these HMOs can be metabolised by other components of the microbiota, bifidobacteria are more efficient at absorbing and processing these compounds and will often out-compete other bacteria, including potentially harmful strains.

Since the 1990s, formula milk manufacturers have tried to reproduce the health benefits of breast milk by including two prebiotic components, galacto-oligosaccharide (GOS) and fructo-oligosaccharide (FOS) in their products. However, GOS/FOS are compounds that have a much simpler structure than HMOs. The latter will often contain two more saccharides, either fucose or sialic acid and tend to be more biologically active. With advances in technology, it has been possible to produce two structurally identical HMOs, 2'-fucosyllactose (2’-FL) and lacto-N-neotetraose (LNnT), in sufficient quantities to be included in commercial products. 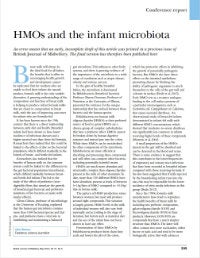 ARE YOU A HEALTHCARE PROFESSIONAL?

The World Health Organisation (WHO) has recommended that pregnant women and new mothers be informed on the benefits and superiority of breastfeeding – in particular the fact that it provides the best nutrition and protection from illness for babies. Mothers should be given guidance on the preparation for, and maintenance of, lactation, with special emphasis on the importance of a well-balanced diet both during pregnancy and after delivery. Unnecessary introduction of partial bottle-feeding or other foods and drinks should be discouraged since it will have a negative effect on breastfeeding. Similarly, mothers should be warned of the difficulty of reversing a decision not to breastfeed. Before advising a mother to use an infant formula, she should be advised of the social and financial implications of her decision: for example, if a baby is exclusively bottle-fed, more than one can (400 g) per week will be needed, so the family circumstances and costs should be kept in mind. Mothers should be reminded that breast milk is not only the best, but also the most economical food for babies. If a decision to use an infant formula is taken, it is important to give instructions on correct preparation methods, emphasising that unboiled water, unsterilised bottles or incorrect dilution can all lead to illness.

If you continue you will be accepting that you are a healthcare professional and that SMA® Nutrition is supplying this information at your individual request and for educational purposes only.

Yes, I am a healthcare professional
No, please take me to SMA® Baby